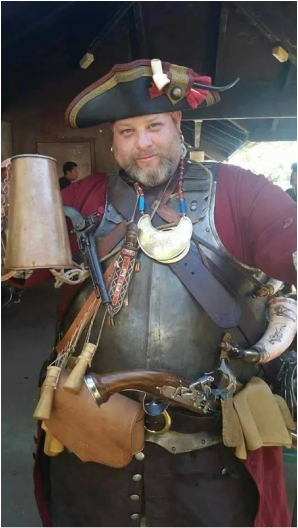 "A collector of all things Colonial, Primitive, and Seaworthy. Dogfish Briggins has a private arsenal to make Pirate Lords green with envy, as he could outfit the whole crew. Few reenactors that I have met have the same passion for the living history side of our Pirate Lifestyle.

"Dogfish found his way into the Pirate Life through the 'Mountainman' Rendezvous scene, he has done rendezvous since 1989 and does a 1750 circa merchant trader persona, and has recently stepped back to the Buccaneer 1660 circa.

"Dogfish has done a variety of New World historical presentations at many schools and educational programs throughout Nevada and California. Rendezvous and Primitive encampments are his forte'. At many a Pirate festival, such as Norcal, you can find him in his 100% period correct encampment where he will be graciously sharing his vittles, his grog, and his knowledge. Be warned, Dogfish is a very generous fellow... and that also extends to his opinions. He is always up for rousing debate over a tankard of his own Dogfish brew and a pipe of tobacco.

"I invite you to look for him at future events. His encampment is easy to find; just follow your nose, it has the most alluring smells escaping from it as some fine roast is turning on the spit."