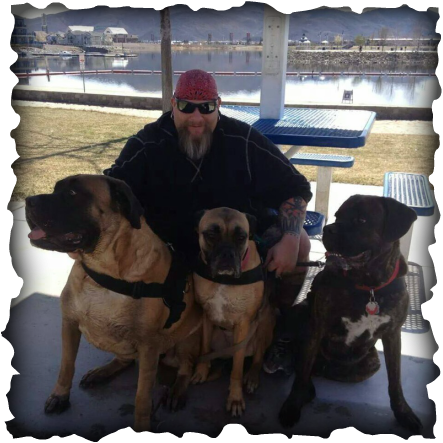 As a child, Corey's parents often took him to the Agoura Renaissance Faire and Shakespeare festivals, this lead to a life time passion for living history. In 1989 he attended his first Pow-Wow, and a year later he attended his first Rendezvous and never looked back. With Corey's interest quickly turning toward the Rendezvous circuit, his passion for history during the North American Fur trade exploded. Attending these events encouraged Corey to grow his collection of canvas tents, daily living effects, weaponry, and knowledge.

In August of 1993, Corey moved to Reno, Nevada and became involved in muzzleloader/black powder groups, which lead to participation in Rendezvous in Nevada, California, Wyoming, Oregon, Washington, Idaho, and Utah.

In 1996, Corey began to share his love of history and large museum quality collection with others. Conducting hands-on living history presentations with Friends of the Frontier, these presentations brought living history educational performances to schools, festivals, camps, and libraries throughout California and Nevada. They also allowed Corey to explore an interest in Colonial History.

While living briefly in Tampa Bay, Florida, Corey attended a Pirate Festival in Key West. He was hooked! Corey began exploring the historical side of this era.

Upon returning to Nevada in 2004, Corey begun to expand his interest to include Maritime trade, the Age of Sail, and the Age of Buccaneers. Acquiring many effects, especially weaponry and clothing. Known as his pirate persona, "Dogfish Briggins" has become well known for his attention to detail and historical accuracy. His encampment display is the living embodiment of life during the Golden Age of Piracy.

Just when Corey thought he had perfected his craft, life changed with the addition of a family: Corey's encampment and tribute to living history now includes a family theme. This expanded Corey's productions to include two children who also love dressing up and sharing his passion.

In 2014, Corey was inducted into the Order of Leviathan. The Order recognizes individuals who are at the top of individuals committed to the "Pirate Lifestyle". Legendary maritime heritage artist, Don Maitz immortalized Corey as Dogfish in a painting. This image is being used in a deck of Pirate Cards as the 6 of Spades. It features Corey with six guns strapped across his chest.

As the Captain of a pirate crew called Pirates of the Silver Realm, Corey has expanded the base of individuals who participate in his encampment as he tours festivals, fares, and rendezvous throughout California and Nevada.